Hi.  It’s been awhile, I know.  For those of you wondering, yes – we are back home in Canada.  Every time we return home for a few months, I’m reminded of how beautiful it is in Wakefield and the Outaouais and how lucky we are to have a home base here.  I would like to lodge a complaint with Mother Nature, though.  We have an infestation of mosquitos going on here and it’s making me want to jump back in the van and escape to somewhere with less bugs…. which I would imagine would be just about anywhere!  I know, first world problems.

So for now we are between travels, but I would be remiss not to blog about our trip home through the US and Canada.  New Mexico and Colorado were gorgeous so I’m going to share some of our favourite spots with you guys.

If you’re thinking that New Mexico and Colorado weren’t on our way home, you’re right… like, really not on the way home.  But we had so many Vanlifers describe New Mexico and Colorado with such exuberance, we decided that we had to see them for ourselves.  So we swung wide to the west to through south western Texas and into the Land of Enchantment. 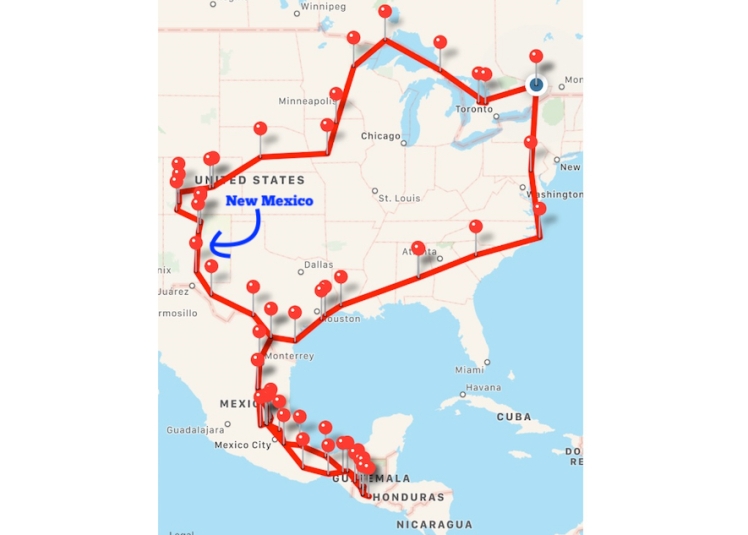 New Mexico is known officially (like, license plate official) as the Land of Enchantment.  It’s a cool nickname but jeez, talk about setting high expectations.  And seriously, after hearing this nickname and all the epic travel stories from friends, our expectations were sky high.  There was a brief moment of worry for me when we entered New Mexico on I10 and passed a massive factory cow farm (so gross and so sad!) but let me tell you, that was the last time this state disappointed me!

Our first stop in New Mexico was the White Sands National Monument.  As soon as I had started searching New Mexico on Instagram, photos of White Sands started popping up and I was like, ‘yep – we’re going there’.  As we drove through a valley of desert scrub surrounded by mountains, giant white sand dunes appeared in the distance.  They looked fake… like someone imported masses of white sand from the Caribbean beaches of Mexico.  There’s a whole geology I could share with you but reading it even kind of bores me, so I won’t do that to you.  Suffice it to say, the white dunes are real… Mother Nature put them there and they’re like nothing on earth I’ve ever seen.

I am now the proud keeper of hundreds of white sand photos because I just couldn’t get over how incredible this place was.  And for the cherry on top, there were several hiking trails winding through the dunes and free dispersed camping just down the road.  If you are going to New Mexico, do not miss this place. 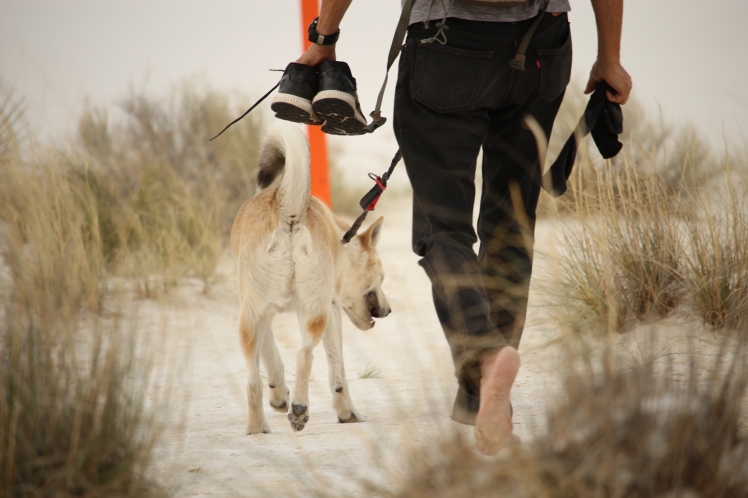 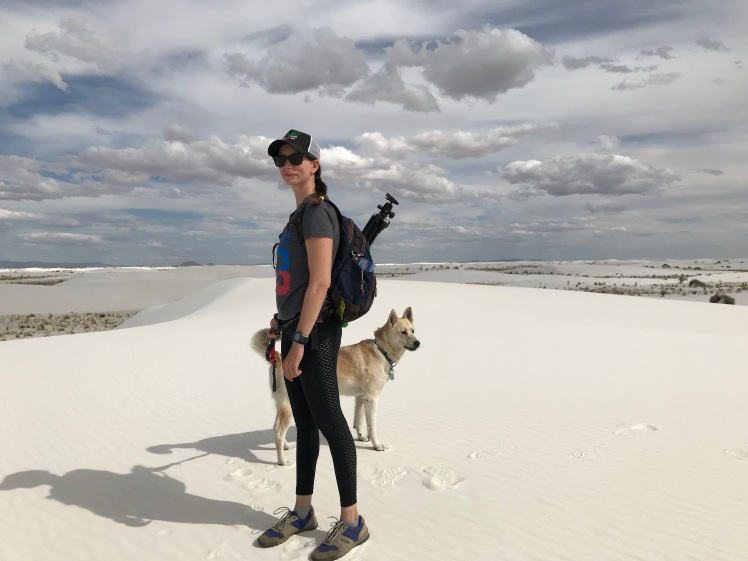 From White Sands, we continued north to Santa Fe.  We didn’t know much about Santa Fe but we’re lured in with the promise of free (and legal) overnight parking at the Visitor’s Centre and a cute, artsy vibe.

We arrived in the city late at night and when we awoke the next morning in the Visitor’s Centre parking, we had no idea where exactly we were.  I feel like this is a very typical Vanlife morning occurrence.  We wandered over to the Visitor’s Centre building to find out that it is closed on weekends.  Weird.  Luckily there were some maps hanging around the front door – first step to figuring out where we were and where we should be going.  From there, we managed to navigate our way to a little Italian Café with WiFi… finally – a connection to the universe!

While drinking our coffees, Wiki explained to us that Santa Fe is over 400 years old (actually indigenous people have occupied the area for thousands of years) and the oldest capital city in the US.  The city’s evolution has been tumultuous: it was originally occupied by indigenous people, fell under Spanish rule in the 1600s, became part of Mexico following independence from Spain and then was claimed by the US during the war against Mexico.  The resulting culture is an interesting blend of Native, Anglo and Spanish which has resulted in really unique architecture, art, food.

What to See and Where to Go

With Wiki, our little tourist map and some other helpful websites, we plotted our 48-hr sightseeing journey.  Here’s our advice on what to do and see if you have only a day or two to see Santa Fe.  Keep in mind that we are not big museum people and only do dog-friendly activities.  Even if you travel to Sante Fe equipped with only this information, you’ll be way ahead of us.  An unlike us, you won’t miss awesome opportunities like the Saturday morning Farmer’s Market in the Railyard District (we arrived just in time for it to close).

The Plaza is Santa Fe’s central square.  It definitely feels like the heart of the City and on the weekend, it is buzzing!  While we were there, they had live singing, dancing and street vendors in the middle of the square, a car show on the outskirts and a lot of very eclectic retirees mulling about.  Stores, galleries and cafes line every street surrounding the square.  Having just come from Mexico, we were a little overwhelmed by how touristy and commercial the Plaza felt but there is no denying it’s charm.  The architecture – mostly adobe buildings – are so unique.  The architecture was probably one of my favourite things about this city. 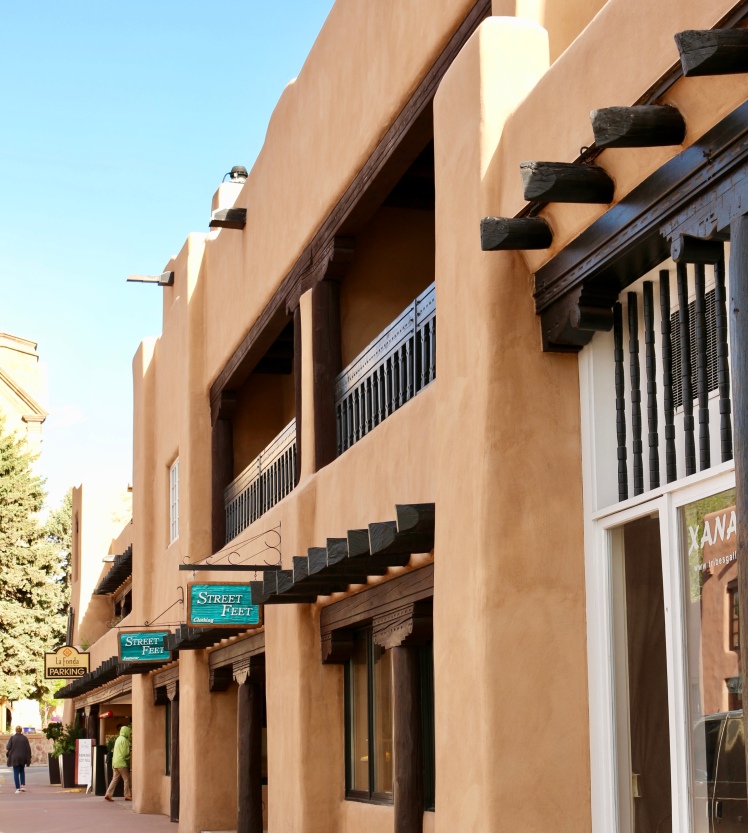 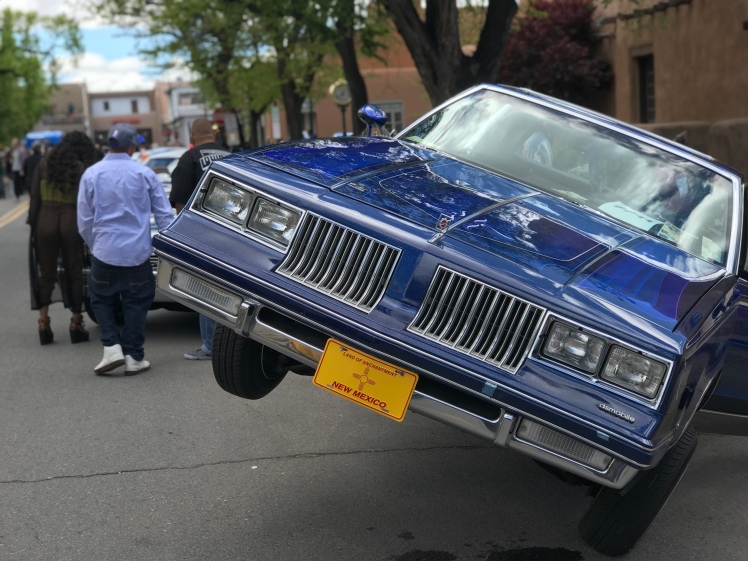 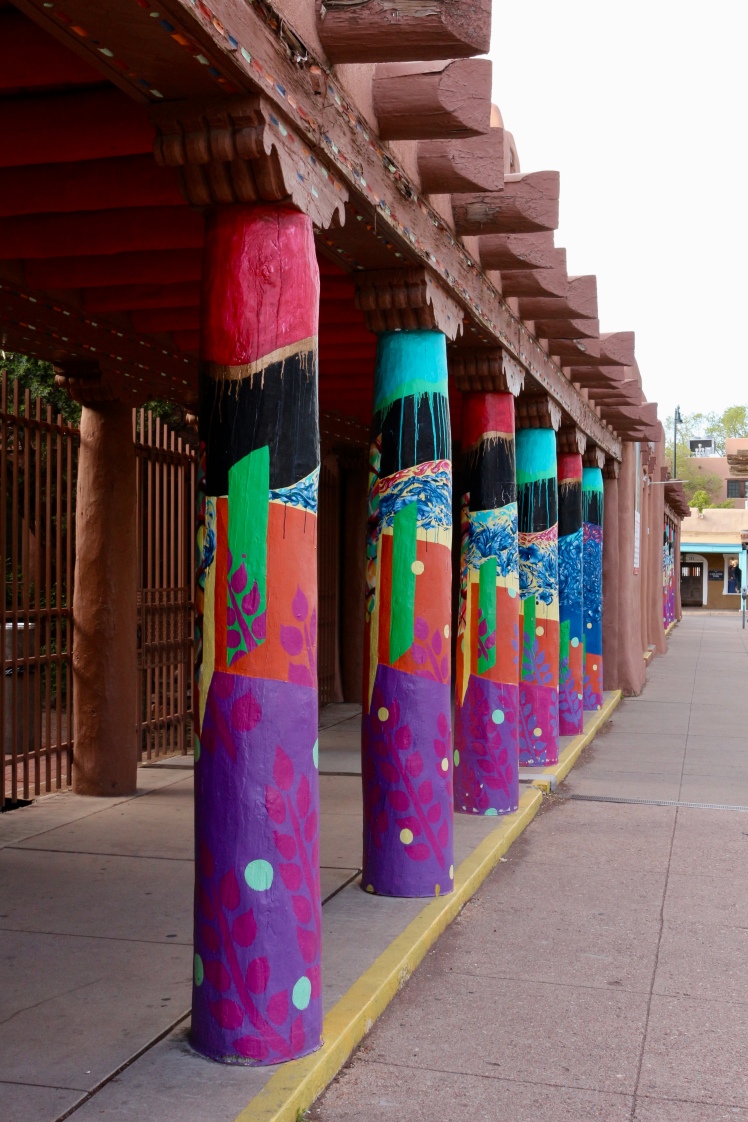 The old, underused rail yard lands west of the city have been revitalized and transformed into a funky urban neighbourhood.  As a result, this area feels very different from the rest of the city.   Like the rest of Santa Fe, it’s full of galleries, museums and restaurants but it’s design is modern, edgy, perhaps even industrial chic (is that thing?… I made it up).  Anyway, the Railyard District is developed with lots of parks, cafes, murals, street art and a new Farmer’s Market (the one we missed).  We met a super eclectic young woman dressed head-to-toe in Pokemon get-up.  She had just left the Sky Cafe and assured us it was awful and over-priced.  Google Reviews disagreed so after a long chat with Pokemon lady, we drank lattes at Sky… the were delicious. 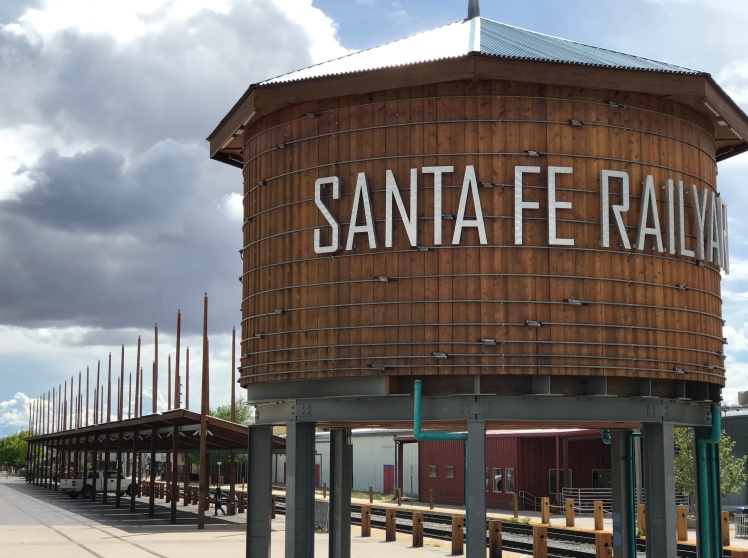 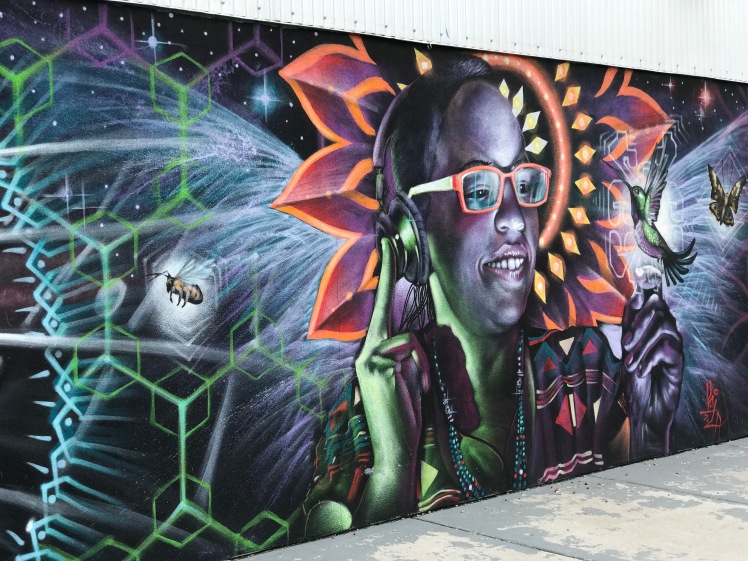 We almost skipped the Canyon Road Art District.  I had read a little bit about it online – enough to know that it is famous for its’ art galleries.  As I’ve mentioned, we’re not much for galleries and when we do visit shops and galleries, we have to go in one at a time because of Walter.  It wasn’t until I discovered that it was voted number one on the list of “Things to See in Santa Fe” that I thought we better go check it out.  Thank god we made a decision to go because it ended up being our favourite place in Santa Fe.  The whole road, which extends for kilometres, is like one big outdoor gallery.  There are sculptures, paintings and colourful signs everywhere and the beautiful adobe buildings are art in themselves.  We did peak in a few galleries and believe it or not, Marc bought stuff!  Crazy, him being the frugal guy that he is.  We also discovered the best tea cafe I’ve ever found – ‘The Teahouse’.  If you go, get a London Fog Tea Latte and a Scone… you will not regret it!!! 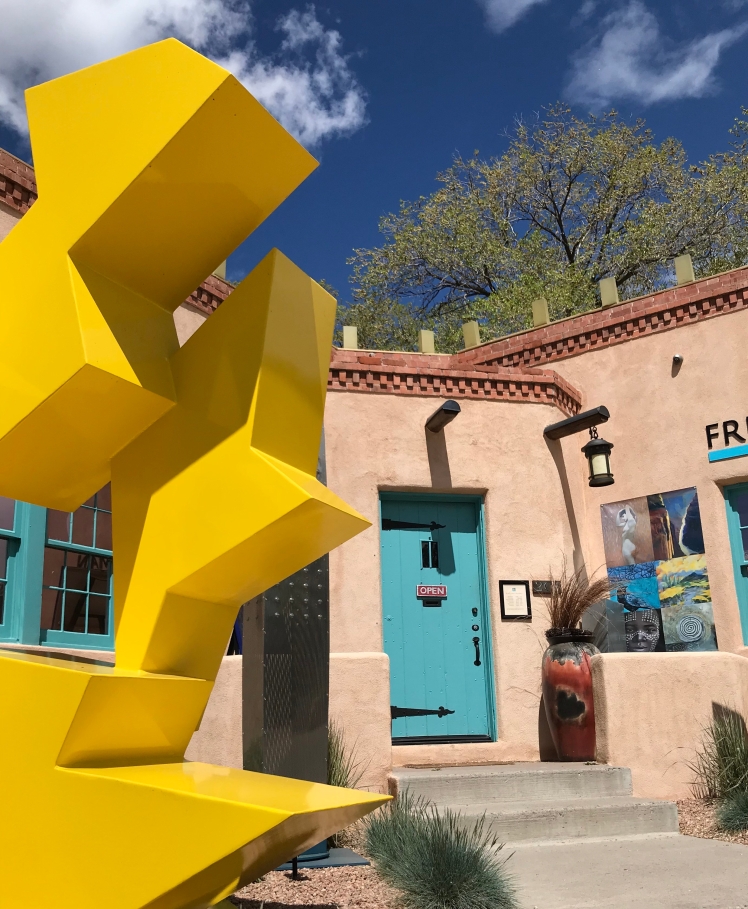 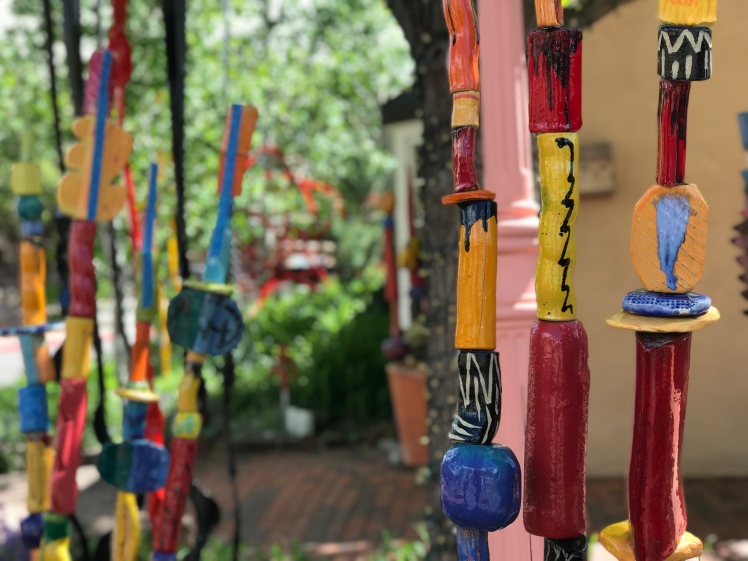 Cross of the Martyr’s Lookout

Santa Fe is fairly flat but there’s a hill, not far from Canyon Road, where you can get a great view of the City.  All along the route up to the lookout, there are plaques with information about the city’s fascinating history.  Learning outside is always way more fun!  We visited the lookout in the late afternoon but apparently the best time to visit is at sunset.  Next time. 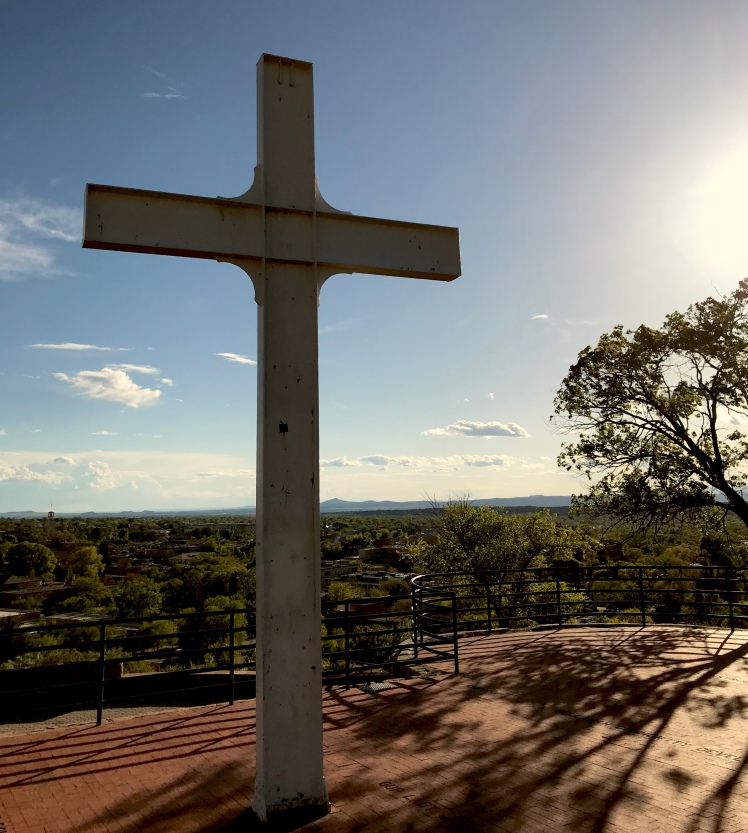 One of our primary reasons for visiting New Mexico was to see the Earthships in Taos.  We were obsessed with Earthships for a while (still sort of are) so this was a pretty exciting stop for us.  We’ll tell you all about our visit to the Earthships in our next post.